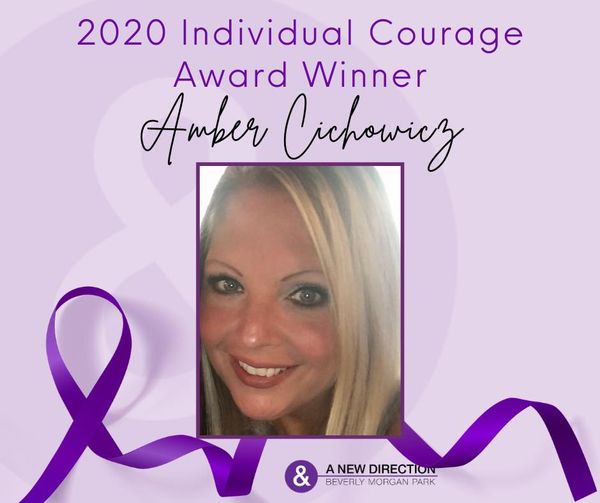 Meet Amber, Recipient of the AND Individual Courage Award

My story starts 9 years ago. My ex-husband and I had ended our relationship after being  together on and off since I was 15 years old. I began talking to my first crush on  Facebook. At a time when I was going through a very difficult separation and change in  my life, he told me everything I needed and wanted to hear. He made me feel important  and special.

Little did I know, this attention was the start of a cycle that would soon spin out of  control. After we began romantically seeing each other, he would text me all day long to  “check on me” and “make sure I was ok”. He would say “don’t go to the gas station, I’ll  go with you. A lady shouldn’t have to pump her own gas.” I thought he was trying to be a  gentleman, and didn’t see the ways these things were slowly beginning to control my  movements and choices. In the early part of our relationship, he would often talk about  his children and his “great friendship with their mother.” I was impressed by this and  thought he valued a healthy relationship with those in his life. I made the decision to  introduce him to my children as well, thinking that he would play a positive role in their  lives.
​
At this time, he was living with his father and would tell me awful stories about how bad  it was there. So, I agreed to let him stay on my couch . That lasted about a week before  his comments made me feel so guilty about his situation that I allowed him to move in  with me permanently. At first I thought for him and me this was another chance at  having a healthy family and another wonderful family for my kids. But, soon I realized I  was never allowed to be alone. He drank to excess frequently. He wanted all of my  attention. His ex was getting married and she and I had become good friends. As a  hairdresser, I had offered to do her hair for her wedding being held in Michigan. The  plan was for me to go alone. But, he insisted on driving me “to keep me safe.” He  stayed down in the lobby as I was in the suite doing hair. After a short time the  groomsmen came up into the adjoining room. Suddenly my phone started ringing like  crazy. He was “losing his mind” about the groomsmen being up there. He began yelling,  telling me to “hurry up and get down there.” He told me “I didn’t belong around other  men.” I was shocked. He had never acted that way before in public. I told myself that  perhaps his ex getting married was really hard for him as his children would now have a  step dad. So, I came down. The minute he saw me he grabbed my arm and said “let’s  go.” His eyes looked black. He didn’t look like himself. He flung me into the car and  peeled out of the parking lot. He was screaming and yelling and driving reckless. At one  point I even tried to open the door to jump out. I was terrified. He grabbed me by my hair to keep me from getting out.

Suddenly something shifted in him and he stopped and out came his charming side. He  said he was so sorry and was so afraid I would leave him. He cried and begged me to  forgive him. I felt bad for him and I believed him.

For a while everything was good and he was so wonderful to my kids that it would melt  my heart. But on the weekends when my children would go to visit with their dad, I felt like a prisoner. I couldn’t go to the grocery store alone. He would check my phone, my  mail, my everything. I wasn’t allowed to “talk back”. If I tried to use my voice I’d be  pushed down, or slapped. He began choking me when I did something wrong or  disobeyed him. I didn’t know what to do.

A couple of years went by. I no longer saw my friends. My children had no idea what he  did and said to me behind closed doors. I felt trapped and alone. I was building the  courage to leave when I found out I was pregnant.

We ended up losing our daughter and a week after the miscarriage, we went to a  birthday party. He was drunk as usual. When we got home he sent my kids who were  then 12 and 14 years old to their rooms. He was yelling at me so violently that it scared  my son and he bravely called the police. When the police came, he was able to regain  his composure and became very charming. He was very respectful to the police officers  and told them how we just lost a baby and were feeling very emotional. The police  asked me if I was ok. I was worried about what would happen, so I said yes and they  left. The moment the police car pulled away, he threw me down. I tried to get away and  he hit me in the eye. This was all my fault. But in the next moment, he told me he was  so sorry. He sent me to the bedroom and wouldn’t let the children see me because my  eye was starting to swell and bruise. He waited on me hand and foot and told the  children they couldn’t see me because I was sick.

When I was finally allowed to see my children he told them he had rolled over when we  were sleeping and had accidentally elbowed me and that was how I got the bruise.  However not everyone was fooled. We saw his daughter a few days later and when  she saw my eye, she immediately started to cry. She knew. His ex looked at me and I  could tell she also knew. I knew then that she had been through the exact same thing before with him. But I was also worried that if other people knew that they would judge  me. I stayed with him, praying for a way out and a way to make the abuse stop. I was  putting things in place to leave him when again I found out I was pregnant.

We didn’t tell anyone for four months. Now, I felt I couldn’t leave. I just wanted a family  for my children. I didn’t want them to go through another break up. Even worse, if I  ended it and something happened to me, I feared my children would be split up. I began  struggling with one illness after another. I developed severe panic attacks. I no longer  felt like myself and somehow years went by.

One day, we were having a great day together out shopping with our daughter. He  hadn’t been drinking. When we arrived home I started cleaning up. I was vacuuming. I  thought he was outside smoking a cigarette, when I heard the volume of the TV go up. I  came in thinking it was our 4 year old playing with the remote. Nope, it was him. He was  angry that I was making noise and he couldn’t hear the tv. He started screaming, yelling,  and calling me names and threatening me. In moments like these, I would find things to  do to get away from him. I went to put in a load of laundry. When I came back in the  living room our daughter was sitting on the couch with her headphones in. She was  playing on her tablet humming. She would hum anytime he would yell at me. He asked me where I had been. I felt angry and at my limit and told him “it was none of his  business.” Before I knew what was happening, he pushed me down next to my  daughter and climbed on top of me on the couch. She was still playing on her tablet. I  couldn’t get him off of me. He grabbed my throat and started squeezing. I was trying to  reach for my phone when he grabbed it and threw it on the floor. I really thought this  was the end of my life. I looked at my daughter and realized she was watching what  was happening. I will never forget the terror on her face. She started to cry and  something came over me. I suddenly yelled “hey siri…call 911.” Even in that moment, I  knew this was the end. I wasn’t going to allow my daughter to think this kind of violence, abuse and control was ok.

When the police came, again I was scared of what would happen if I pressed charges.  But they did make him leave the house for 24 hours. During that 24 hours I got the  courage to tell all of my family and many of my friends about the abuse I had been  experiencing during these years. Deep down, I knew how much appearances meant to  him. So telling the truth would make it final. It also solidified something in me, because  this was the first time he had hurt me while he was completely sober. I had no more  excuses for him.

In the days and weeks after that event, my little girl would tell anyone who would listen  what happened…strangers, other kids and adults. So, I let her teacher know what had  happened in case she talked about it at school. That’s when she gave me the phone  number to A New Direction Beverly Morgan Park.

The woman’s advocate called me back right away and I went to see her. I was very intimidated at first. She is a woman who tells it like it is. I couldn’t hide  or make excuses anymore. I finally began to fully understand the cycle of my partners  behavior as abuse and that it was not my fault.

All of the services they provided were at no charge. All of them. They have a children’s therapist  and she started seeing my daughter almost immediately for therapy. Again for free! She  gave my daughter a safe place to process what she had witnessed and she helped me
understand children’s reactions to domestic violence and how to respond to my  daughter. I never would have been able to afford help because I was completely  dependent on him financially. When I would work he would accuse me of cheating. I  could never be away from my daughter. He was, as he said, “the man”.

The wonderful people at A New Direction helped me get my life back. They showed us  ways to stay safe and to heal. They are always there for us. I am even looking into taking the 40-Hour Domestic Violence Training class so that I can help others like me. For me, and women like me, this is a matter of life and death. Sometimes I think about what would have happened if I hadn’t found A  New Direction. Would I still be with him, living every day in an abusive relationship or would my ending have been even worse?

​It has been 570 days since we have been free and I am so grateful for each day. Thank you for your gifts and generous donations to A New Direction that makes this  continued support possible for children and women like me. It truly takes a village.

A New Direction provides support, counseling, advocacy and education to individuals and families affected by domestic violence. Our work is not complete until every home is safe and free from abuse.

Internet usage can be monitored and is impossible to erase completely. Learn more about digital security and remember to clear your browser history after visiting this website. Click the red “Quick Escape button” in the upper-right corner at any time to leave immediately.
OK